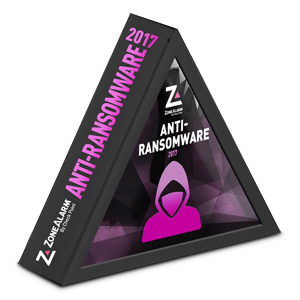 Analyzes all suspicious activities on your PC. It detects Ransomware attacks, blocks them and immediately restores any encrypted files.

Thousands of new viruses are being created every week to attack your computer. Your antivirus software should effectively protect your computer against known and unknown malicious programs.

Independent antivirus test results reported below confirmed ZoneAlarm's superior ability to detect and remove viruses from your computer. In addition, ZoneAlarm includes unique features like the OS Firewall, which work hard to prevent viruses from reaching your computer in the first place.


Virus Bulletin is the leading specialist publication in the field of viruses and related malware. In the publication's April 2008 comparative review, Virus Buletin awarded Check Point ZoneAlarm its VB100 certification. Learn more at Virus Bulletin/ VB100 or see our Awards and Recognition page.

With nothing missed in the Wild List set, and precious little elsewhere, and nothing more than a few warnings of possibly unwanted items in the clean set, Check Point's product wins itself its first VB100 award at the first attempt, without even breaking into a sweat.

See how ZoneAlarm protects you from the most notorious threats.

From a variety of publications that conduct their own tests, evaluations and rewiews.

Get the most comprehensive suite on the market. Protects your PC, your browser and your data.


AV-Comparatives is an independent organization that tests how well different antivirus engines detect viruses and other threats. Review these test results to see how Zonealarm PRO Antivirus + Firewall performs in comparison to Norton, McAfee, Micorsoft and others antivirus products. Look for the test results for Kaspersky, which represents the antivirus scanning engine in ZoneAlarm 7.0 and later. See Anti-Virus Comparative tests February 2008.